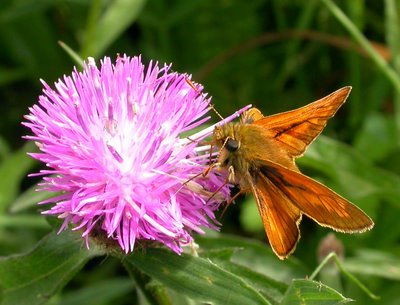 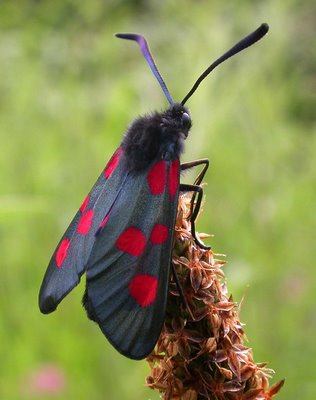 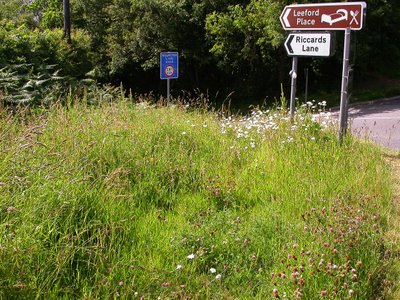 In mid-June I walked up to the junction of Riccards Lane and the A21, the main trunk road to Hastings once known as Windmill Corner (TQ766188). The wide verges here are very rich in wildlife and seem to be the tiny remnants of ancient meadows. On one I found several narrow-bordered five-spot burnets, Zygaena lonicerae latomarginata (middle picture above), as well as the large skipper, Ochlodes venata, and some 'undisturbed grassland' indicators such as fairy flax, Linum catharticum. A detailed survey over a full year would, I suspect, deliver a long species list for this verge. 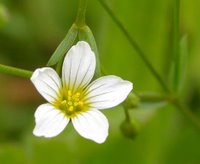 Yet it is hardly an auspicious spot with fast traffic racing past most of the day and night. I have passed by hundreds of times, often more than once in a day, but this is the first time I have stopped and taken a proper look.
Posted by Patrick Roper at 9:40 am No comments: 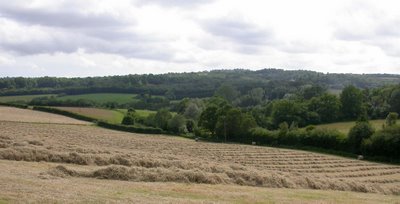 My first picture shows the view from Riccards Lane looking south westwards into the valley of the little river Line and across towards Battle. The few houses and church of Whatlington village itself are largely hidden in the trees right of centre.

I took this from a gate leading from the busy A21 road and it is a view I have never had before, though passing within a few metres of the vantage point many times a year.

As W.H.Davies famously said "What is life if full of care, we have no time to stand and stare ..."
Posted by Patrick Roper at 11:00 pm No comments:

Introduction to Whatlington in TQ7618

I have set up this blog to try and show how selecting a 1 kilometre Ordnance Survey grid square from which to record biodiversity and other things of interest will reveal much that is unexpected.

In most parts of the British Isles, and Sussex is no exception, many 1 km grid squares have very few wildlife records. The main reason is that they appear, from the map at any rate, to be rather nondescript. They may have no nature reserve, country park or Forestry Commission woodland; no large lake or river. Few would aim to undertake a recording expedition to such a place, especially as access often looks poor and restricted.

However, I have found over the years that these squares almost always have hidden delights. Roadsides and little used footpaths often pass through places whose quality as biotopes cannot possibly be divined from an OS map.

Working, as I do, with the Sussex Biodiversity Record Centre I know how important it is to gather records from these less visited squares. Rarities might be few, but we need records of every species in the wild to build up as full a picture as possible of wildlife in Sussex and how it is changing.

If you would like to look in detail at an under-recorded square, the Record Centre will gladly suggest one (or more) for you.

For this first excercise I chose a square about 2km from my house, a square I regularly travel through so all I have to do is take a little while out to do some recording. Have a look at it one the map here.

My chosen square lies mostly in Whatlington parish, but there are a few bits of Sedlescombe on the eastern boundary. I did some recording in these years ago as it was part of my own area, but the rest away from the roads is almost all terra incognita. Other than these few records, only 25 species were recorded in the SxBRC, many of these of fish in the river Line.

My main aim is simply to do what is known as a 'walk over' survey, and not look in great detail of some of the larger orders of smaller things. I may perhaps focus on this square for a year and then move on to another square with a new blog. If other recorders would like to join me on my perambulations they would, of course, be very welcome.
Posted by Patrick Roper at 10:11 pm No comments: